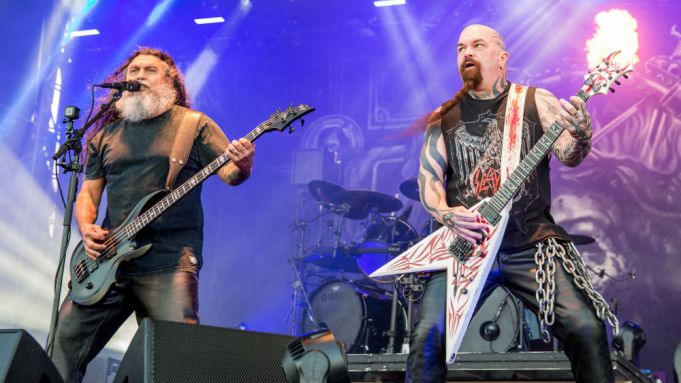 Formed in 1981, Slayer was one of the most popular metal bands worldwide. Their songs mainly addressed issues such as murder, serial killers, religion, racism, and politics. That said, they managed to receive five Grammy Award nominations, two of which they won. The band also got a gold certification in the United States for four of their studio albums.

The original slayer members included Dave Lombardo as their drummer, Tom Araya as their vocalist and Kerry King and Jeff Hanneman who were guitarists. Later on, Paul Bostaph replaced Dave as the slayer band’s drummer, and Gary Holt replaced Jeff. Slayer band was also joined by another drummer, Jon Dette, along the way. During their tours, their musicians included Pat O’Brien and Phil Demmel, who also played the guitars.

Slayer Albums And Their Music

Slayer band made several albums; twelve were studio albums, two live albums, and one cover album. They did two music videos that featured hellish themes, which only increased their underground popularity. One of their earliest album, Hell Awaits, made for 1985’s best album in the Metal Forces poll. Some of their most played songs include Disciple, Eyes Of The Insane, and Final Six.

With unique musical style and lyrics, Slayer was among the most influential band in the metal genre. Their reign extended for three decades during which they managed to sell millions of albums. They also toured many places, including the United States, Australia, and New Zealand. The band decided to call it quits after their farewell tour that took place between 2018 and 2019.